Trang chủ » Repairing a MacBook or iPhone yourself is difficult.

Repairing a MacBook or iPhone yourself is difficult. 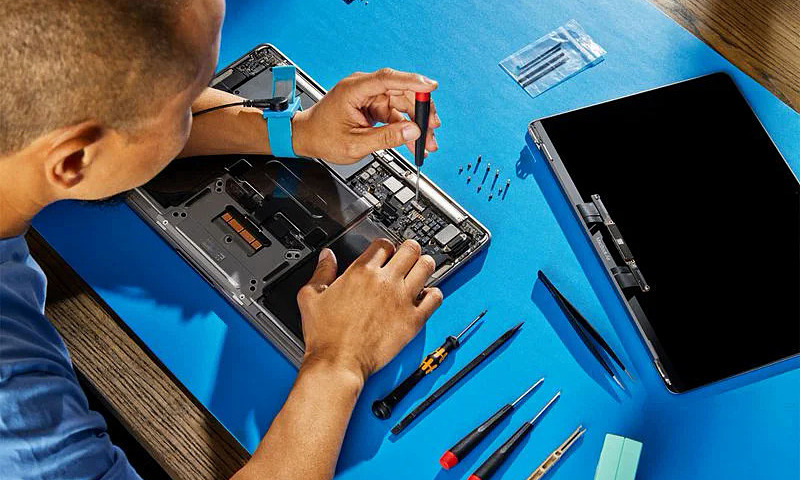 Repairing a MacBook or iPhone yourself is difficult.

iFixit believes that people who want to repair MacBooks and iPhones themselves face many obstacles because Apple’s instructions are long and difficult to follow.

On August 22, Apple made the self-repair program applicable to MacBook Air and MacBook Pro laptops with the M1 chip and later. Previously, the company only allowed users to repair iPhones.

Sam Goldheart of iFixit, a company that specializes in assembling digital devices, tested the service by replacing the battery on his own 14-inch MacBook Pro. He says his experience following the self-test was “mixed feelings”.

To replace the new component, users must first read Apple’s 162-page document, which “requires patience and an understanding of every word.”

Another obstacle is the bodies. Apple doesn’t yet allow customers to replace the MacBook Pro battery themselves. “As it turns out, replacing a battery isn’t as simple as taking the old battery out and putting in a new one,” Goldheart said. “Users need to replace the entire top of the device, including the battery, keyboard, speakers, and many other components.”

Rather than selling every part, Apple wants you to buy the MacBook battery and keyboard assembly (including the surrounding aluminum frame) for $527 on its website. Meanwhile, users who replace the battery separately at an Apple Store or authorized service provider only need to pay $199.

Apple offers self-repair with amazing obstacles. In addition to forcing users to read 162 pages of documentation, they would have to pay a higher than necessary fee for the surrogate class, Goldheart commented. “I wonder if Apple wants users to fix their devices.

The Apple representative took note of this expert opinion. The company plans to sell the battery units separately in the near future, but hasn’t specified that.

In April, Apple launched its first home maintenance app for the iPhone. The company rents 49 units per week for a $1,200 deposit and sells the units separately.

The move by users to get their iPhones repaired is seen as a turning point where they can “revive” their electronic devices without the need for service centers. However, many people have tried following Apple’s instructions, with “disappointing” results.