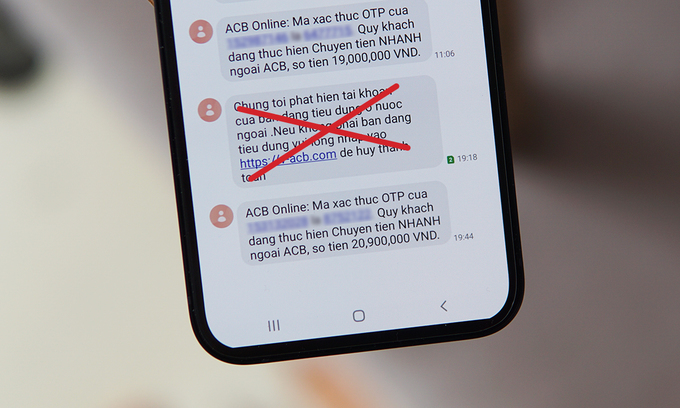 E-mail traffic has increased significantly in the last two weeks. Emails, text messages, websites masquerading as banks and financial institutions, many organizations have sounded the alarm.

Anti-phishing project founder Ngo Minh Hieu said the system had received hundreds of user reports in the past two weeks. During the review, the system identified about 30 domain names posing as major banks and financial institutions in Vietnam.

These phishing domains are usually of the form “namengbank.vn-a.top”, where “vn-a.top” is the original domain name. Scammers can replace the subdomain with Vietnamese bank names. According to security researchers, when viewing it, users usually only pay attention to the “tennganhang.vn” part and may confuse it with the official bank website. According to the Anti-Phishing Project, these phishing domains are mostly distributed via SMS and email. In an email to convince users to click a link.

Dang Nhung in Hanoi said he recently received this type of text message. The message said her account “has been registered for a payment of VND2,000,000 to International Financial Services and will be charged within the next two hours.” To cancel, users must visit the website at techcombank.vn-pl.top. “When you access these sites, the user interface often resembles a bank app’s login interface and asks for a username and password,” Nuhung said.

Ho Chi Minh City user Quoc Tuan recently received a message that his bank was blocking his card and asked users to access a link for help. It should be noted that this message entered the same stream as the bank’s SMS to Brand Name and was sent to both phone numbers at the same time.

In a warning sent to customers at the end of July, VPBank points out that there are many new methods of posing as a bank and cheating consumers.

“The scammers send the customer a fake email instruction stating that their credit card balance is due. Then they call the customer, pretending to be a banker, to make an “application” and force him to repay the outstanding loan,” says the report.

MoMo e-Wallet also said that some scammers posing as the department are sending emails to users. Letters saying “VND 1,999,000 awarded”. According to MoMo, scammers prey on free services and encourage unwary users to continue using fake websites and request one-time passwords to steal phone numbers, passwords, and login credentials. user input. “After the customer enters the information, the scammer steals the customer’s credentials and begins distributing the money,” he warned.

According to the Information Security Division, in the first six months of this year, the division helped 1.5 million people by investigating 506 websites posing as financial institutions. Internet users to access websites.

Experts advise users to double-check before reaching for banking and financial institution domain names. Scammers often want to use ID numbers, CCDD, family registration, e-banking credentials and OTP codes on fraudulent websites. Users are strongly advised not to provide any personally identifiable information to any third party, including anyone posing as an investigator or bank teller over the phone.